UK's Abyssal mark their return in the beginning of this year with "Novit enim Dominus qui sunt eius", that translated to english means "For the Lord knows those who are his". This is their second full-length after last year's very well received first album, "Denouement". This second full-length follows the footprints left by the previous record where in over one hour, the eleven tracks of "N.E.D.Q.S.E." unleash the most dreadful black/death metal I had the pleasure to hear already.

It begins with an atmospheric intro, "Forebode", which basically opens the gates of hell we are about to enter. "The Tongue of the Demagogue" sets everything immediately on fire, releasing all Hell's creatures upon the Earth. In terms of sound, expect the same production heard on "Denouement", when they aren't busy shooting dozens of Deathspell Omega-esque swirling riffs at us, they are throwing these Portal-esque notes that sound almost as a swarm of giant bees attacking us all at a same time. I mean, the atmosphere gets so thick and heavy.

I think the best way to describe Abyssal's sound on this record is that it's almost like this giant black snake with flaming red eyes, moving sinuously and slowly between us and as the minutes go by, it squeezes us more and more, the more we struggle to get out, the tighter it gets. "Under the Wretched Sun of Hattin" follows the same path. Incendiary blast beats rain down unexpectedly as swarm of riffs attack the listener's ears giving no respite until it reaches our mind infecting it with the horror. "Elegy of Ruin" is served as short interlude and it gives the motto to "The Headless Serpent" that continues the path of devastation and really brings to my mind the chaotic rampage we are used to get with bands like Ulcerate or even Mitochondrion, but it's more than obvious that the percentage of black metal influences on Abyssal's sound also has it's heavy share although it is very well balanced here with death metal.

The rest? I'll leave you to discover this great, great album by Abyssal. All I can say is that I'm enjoying this one way more than "Denouement". A very good and unexpected album, filled with notes that will turn your head around. The more I listen to it the more vicious it gets. Just head over to their Bandcamp where you can listen to the whole thing, download, etc. But let me remind you that this is available also for purchase here. Support great acts like Abyssal. Highly recommended! 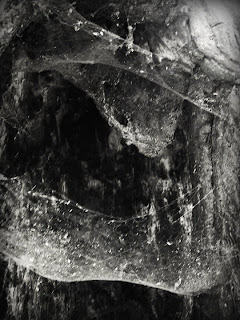 Under the wing of the Chimaera