If you're into the brutal and dark side of hardcore and you still haven't heard of U.K's Black Mass then you are clearly missing it big time...

Black Mass have been around since 2010 and have at this point released a Demo, an EP and a Split release with Host. "Of First and Last Things" is a compilation and re-recording of all their recorded material to date, plus one previously unreleased track.

Well, what can you expect from a band that states on their Facebook page that their influence is "Horror, disgust and anxiety through tonal abuse and overwhelming volume."? Ridiculous and brutal drum discharges filled with the most dirtiest of the riffs that will carve into your flesh while fierce and vicious vocals will make your bones almost shatter. Black Mass aren't fooling around. They have got to be one of the most underrated bands in the midst of this darkest faction of hardcore. These lads grab a handful of genres like hardcore, crust, death metal and grind and blend it into this furious and evil potion to which is impossible to stay indifferent.

It's impossible to hear "Of First and Last Things" without banging your head or tapping your foot to the sound of it. The minute you start hearing the first track "To The Cross", they immediately grab you by the neck and throw you around like some rag-doll. The sound is perfect. Very dirty, sludgy and crusty. That's the kind of production i love. Just ugly, in-your-face and raw. You get all the evilness you can get from bands like Trap Them, Entombed, Cursed or even one of the bands mentioned on their page that i miss a lot, The Power And The Glory, all in one, but Black Mass is not just one of those copy-cat bands that follow this genre. Their tunes are fresh and never fall into boredom, just look into tracks like the infamous "W.P.P.V.B.T.Y.B",  the Entombed worship in "Left Hand Pass" and on the unreleased track "Corporal Imprisonment", tracks that clearly have a more death metal vibe attached to it. And one of my personal favorites, "Our Father" where they begin by introducing something else than just slamming powerviolenced hardcore, instead of physical damage here we get psychological terror as well, it almost seems the kind of stuff Column of Heaven creates. And i fucking love it. I can only imagine this band live: a wall of noise, bodies flying and thrown around, sweat, blood.

Listen, these kids can really play. By doing so, they are simply one of the best acts that the UK has to offer in this field of heavy music right now. Seriously.

"Of First and Last Things" will get a physical release coming in the near future through Witchunter records. Not sure if in vinyl although it deserves it for sure. For now, the band has made it available for free download via their Bandcamp. Until then the band will be writing, recording and playing shows over the coming months. Be sure not to miss anything through their Facebook page. Show some love and support the Mass. 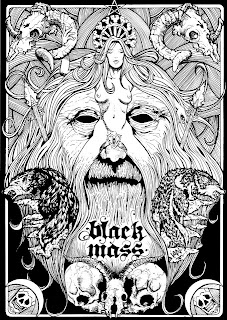 Blackest of the Mass