Ezkathon is a Danish one man metal band formed by Mads Tellerup Madsen, former Whorls guitarist. Mads started Ezkathon back in December 2010 as a grind-influenced black metal project, but with time it became more "atmospheric" influenced. And now it has solidified its roots into black metal. The best way to describe Ezkathon's sound is that it can be described as "atmospheric black metal" although the tag "post-black metal" can also be attached to it. So far Ezkathon has released a three track Demo and a one track Demo late December of last year. Carrying a very DIY spirit behind this project (basically he  does everything here) Mads has put his heart into this project catching my attention with his own interpretation of atmospheric black metal. I'm basically a sucker for anything that comes from Northern Europe, these guys up there really have a knack when it comes to heavy music. It's hard for me to explain, it's basically very special.

In Ezkathon's case, in this three chapter Demo, i really enjoy the sorrowful atmosphere attached to its sound, like we can hear on "Chapter I: Collapse... By The Divide of The Great Devourering Deep". It's a very dramatic track almost depressive, dragging us at a slow pace to the middle of nowhere, leaving us in perfect solitude but it only takes a few minutes before the harsh voice interrupts this feeling, and raises one hell of a blizzard around us. In "Chapter II: The Heavens" we get straight to the point, from the beginning to the end we get sharp slivers of black metal. Sound-wise the whole Demo reminds me of Altar Of Plagues' "Tides", the whole mix sounds really harsh and roughly trimmed as the voice seems to be on another level, like a haunting presence floating around the whole set. Overall, no matter the method, the result is accomplished.  The Demo closes with "Chapter III: Finality... Voices Of A Colossal Sleep", a 12 minute long track that basically follows the steps of the previous ones: cold grim screams are thrown in the middle of a blast-beats and tremolo picking guitars storm before closing in a very atmospheric, melodic way. The only negative aspect i can point here is the fact that at some points, the songs seem to disperse a bit and may sound a little bit repetitive. They needed some high moments where Ezkathon could introduce something totally unexpected to the listener in order to caught our attention.

But in overall and not belittling the work of the artist, I think Ezkathon did a fine job here, being such a young project of course there are some edges to be trimmed, but with time I believe the quality of this project only will tend to improve.

A good and original interpretation of atmospheric black metal coming out of Denmark that gets the Haxan's seal of approval. Stay tuned for future Ezkathon releases here. Recommended for fans of the most atmospheric faction of black metal like Ayr, Ash Borer, Ajuna, Barrowlands, etc. 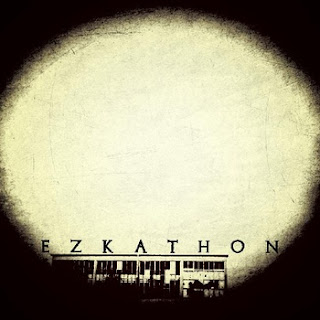