Blåkulla "Darkened by an Occult Wisdom"

Blåkulla is a one man black metal band that goes under the pseudonym of Surtr Blackmoon Emperor, and "Darkened by an Occult Wisdom" is the first release of this obscure french black metal act. Containing 5 tracks, in which some of them even surpass the mark of 9 minutes, "Darkened by an Occult Wisdom" is a very solid and interesting release, specially when you think that there's only one man behind all of this. I can immediately sense the influence of early Burzum and Darkthrone on Blåkulla's sound, it's primitive, raw, aggressive and extremely nefarious. Said that, Blåkulla's music is filled with all of that true black metal essence but it also carries some occult aura over it, giving the tracks an haunting atmosphere. From the beginning to the end we get these hellish and epic tremolo picking allied with unstoppable blastbeats being constantly fired by the drum kit, Surtr's voice sounds deep, almost as if it was layered behind all of the instruments, and the bass, yes... he is present and is quite noticeable in the entire record. Although the tracks seem repetitive when compared to each other and within them i feel that Surtr must review his formula in order to avoid the common listener to fall into boredom. But even so, Surtr definitely gives us some glorious tracks, like the opening "Ancient Mysticism & Fullmoon", "Revelations Of Celtic Sorcery" and "Victory & Glory Or Death", that are filled with great epic moments and pay true respect to the old canons of true black metal. Recommended to all of those who like their black metal like i like my coffee.. black, no sugar-coating, no faking, and no drama. Released as a limited edition cassette last year on Cold Void Emanations. 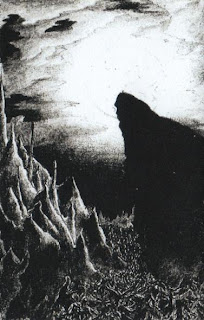