Mass Culture are a Post-metal/Down-tempo/Sludge / Experimental formed in 2011, is composed from four individuals, coming from Tripolis-Sparti-Athens, Greece.

Each member has had its own musical path and identity, but having common components and a wide appreciation for the music of bands such as Isis, Neurosis, Cult of Luna, they decided to start up a band somewhere along those lines. They started, however, experimenting and incorporating further elements into their music, varying from the post-hardcore outfits of Time to Burn and Buried Inside, to the doomy sound of Yob, with a Fall of Efrafa/ Downfall of Gaia dark neocrust feel, retaining the ambient/post-metal Omega Massif-like sound and, of course, many more.

I personally find Mass Culture's sound very close to a Coffin Dancer, VYGR, Tree of Sores or even Rituals. These four tracks on "Amoralism" are extremely addictive, i can't get tired of listening to this over and over. The sound is perfect, it has that echoing deepness attached to the Mass Culture's melody gives a dark and grim personality to the music, giving it epic proportions that develops into an absorbing environment that encloses us for almost half an hour. The band is giving this fantastic EP for free so listen to it, absorb it, spread it. Highly recommended. 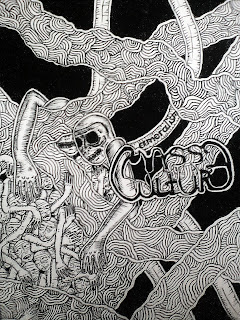 listen | sludge for the masses