"At its core, Chrome Waves are black metal, that’s not up for debate, but the sheer melody and almost post rock arrangements has given the band a whole new depth. The ethereal artwork certainly portrays the serene and atmospheric side of Chrome Waves while Stavros Giannopolous’s searing shriek is totally at odds with it and the dichotomy conjured as a result of that is what keeps this short 28 minute effort interesting from start to finish.

“Hearts over Feathers” lays out a tranquil introduction to this record that gives way to the caustic sounds of “Height of the Rifles” as it trounces through vicious verses of both unrelenting drums and gripping guitar flourishes swanning overhead. Beginning with slower mid tempo BM melancholia, the song scales and scales to a jaw dropping and beautifully melodious crescendo as Giannopolous agonisingly screams over the sprawling aural vista created. The track really captures all of Chrome Waves’ strengths perfectly as the black metal that formed their musical journeys blossoms into a being almost of a different life force.

This is only an EP and one is left feeling that this is a band with a lot more to say and do, an itch that can only really be scratched by the release of an album. But for now, Chrome Waves have released a staggering first effort with ideas bursting the seams. This is some of the finest melodic black metal you’ll hear this year with crushing classic black metal moments that nod to the more orthodox way of thinking while vibrant amounts of ethereal melody also rear their heads plenty of times like the slickly executed “That Cursed Armored Train”. Then concluding with the imposing “Blackbird” instrumental moving between spectral acoustic layers and dizzying lead guitars, Chrome Waves’ EP, again, feels criminally short but leaves with an invigorating salvo of perhaps more around the corner soon."

Chrome Waves really got all eyes on them, due to the fact of being a "supergroup" but the truth is that they are not really bringing anything new into the post black metal scene, it's their approach that makes this release quite interesting, making this release above the average line of what has been released this year when it comes to this genre. Dip yourself into this trip and let the waves drag you far away. The vinyl is already sold out but you still can grab this here. 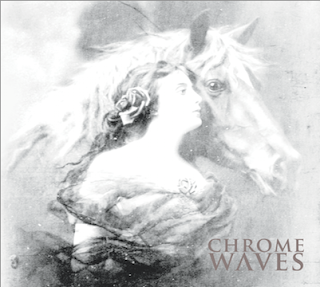