Torchrunner "Committed To The Ground"

Can you hear it? The sound of the Apocalypse?

Fucking Torchrunner... bringing one of the most devastating albums of the year. "Committed To The Ground" is the band new full length that will fuck up everyone and everything. Really. Everytime i hear this album i'm automatically possessed with an unexplainable urge to destroy and spread anarchy.

Delivering 12 tracks in about 22 minutes, you won't even realize what hit you. Bringing an incendiary blend of grind, crust, hardcore Torchrunner's formula to chaos is on "Committed To The Ground" is absolutely devastating. Following these guys since day one, i knew that they were on to something and what they accomplished here is really impressive.

Grab some Converge and some Trap Them and then add some Napalm Death, blend it well... after that, double the dose. You won't get one second of rest after getting on this one, even the slow, sludgiest tracks like "Canon Cast", "Committed to the Ground" or "The Holy Are The Broken", that invoke the ghost of my deceased and beloved Cursed, will crush you deep into the ground in the middle of this whole this frenzy wave of destruction that is "Committed To The Ground". I'm more than excited about this album, it quickly became one of my favorites for the year and we will see it on very "Best Of 2012" lists for sure, i know that it will be in mine... without a shadow of doubt. Fucking Torcherunner... All i see on this is chaos, screams, pure fucking destruction, with this release these guys are way ahead of the rest of the pack. Along with YAITW, Torchrunner have got to be one of the most powerful bands in the dark/crust/hardcore/whatever-you -wanna-call-it scene.

Don't listen to this, it will fuck up your life. I believe it will be released on vinyl (with a digital code) soon. Stay sharp here.  Highly Recommended! 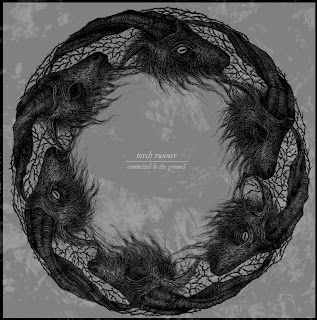