Another album that i've been into a lot lately is the latest child, hell spawned, of Australia's Elysian Blaze entitled "Blood Geometry". As i read on the web, this album has quite the history behind it.

"Blood Geometry" was completely all the way back in 2007 and was slated for release in 2008, but that was pushed back to 2009. Then 2010. Then 2011. The band's only member, Mutatiis, is a fussy perfectionist. Just as the album was about to be released, he would see something wrong with it and go change it. He eventually stopped being so fussy and released it in 2012.

Was it worth the wait?
You bet your soul it did.

I can't think of proper words in order to describe what this album is... i'm still numb drunk from all of the glory and epic proportions around "Blood Geometry". Few albums can achieve what Elysian Blaze has made here. An absolutely outstanding album. A must-have. It's the "5th Symphony" of blackened doom. A masterpiece in all of its proportions, and when i say it, i mean it. "Blood Geometry" in it's whole lasts over two hours. It comes in double CD or for wax lovers, in three (!!!) slices of vinyl.

Disc one opens with "A Choir for Venus", an intro/instrumental track that unveils in the dark mist, a beautiful piano track with an epic and dramatic outline around it. The motto is set. Right after that, a massive hailstorm of riffs flood our ears and drags us down into this catastrophic scenario with "The Temple Is Falling". You see the cover artwork? That's precisely what this track represents. Dark skies circle over a maya (or aztec) pyramid while it starts to crumble in the middle of this storm. Somehow it makes some sense why this album took so long to be released. According to the Mayan calendar, the end of the World is set to this year, 2012. Maybe Mutatiis had a vision or some kind of premonition and released "Blood Geometry" so that it could be the perfect soundtrack to this very end. I'm a little sceptic about this but one thing i know, this is really the perfect soundtrack to events of this proportion. The following tracks, the amazing "Sigils That Beckon Death" (that lasts almost half an hour) and "Blood Geometry" (another great instrumental track/outro) follow the tone set by its predecessors. At the end, I'm totally blown' away. Disc two shares the same concept as the first one, four tracks, begins with an intro/instrumental track, two massive tracks and another outro/instrumental/ambient track. Outstanding.

To be honest, in this kind of records, I'm always afraid that an album as ambitious as this one ends up by becoming boring. But the more i listen to this, the more I'm hooked and it proves me that my first guess was absolutely wrong. From the beginning to the end, "Blood Geometry", reveals to be a very controlled album where each detail was studied to exhaustion. From the beginning to the end, the atmosphere is amazing, i mean, Elysian Blaze knows his thing. Better than anyone he knows how to create a very thick and dark atmosphere. Forget about what you heard on "Cold Walls and Apparitions" and "Levitating the Carnal", "Blood Geometry" is way ahead and it's way more massive.

Dwelling between funeral doom and black metal territories, there is also space on the tracks for some long sections where lie some very interesting atmospheric parts that give the music a very peaceful,  solemn, quiet character. Their purpose is to build anticipation until the those ghostly rasps and howls, filled with hate start all over again. There are piano, organs, and other symphonic elements that enhance even more the atmosphere created by Elysian Blaze.

"Blood Geometry" maybe two hours long, but every second is worth it. No doubt that "Blood Geometry" will make it on my Best of the Year list. Absolutely recommended. Buy it here or here. 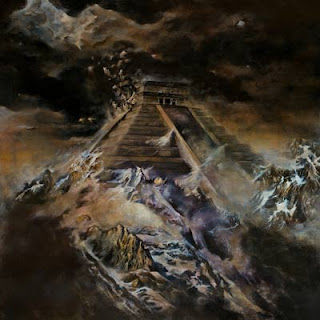