A kick ass album, this "Vultures At Dawn". Coldness evil is majestically served in furious riffs, crushing drumming and soul freezing screams. "Vultures At Dawn" is the forth release of american Black Metal band The Funeral Pyre, it doesn't sound like the usual Black Metal with corpse paint and cold low fi tremolo picking sound.. it's more of an brutal-evil-as-fuck-death-influenced-black-metal.. so let's just call it Blackened Death Metal. This band is really good, and in case you didn't know, their vocalist John Strachan, recently revealed that he has joined Early Graves as their new vocalist. Strachan is going to replace Makh Daniels, who passed away in a van accident (may his soul rest in peace). So expect an extra dose of brutality that he has in TFP in Early Graves. Meanwhile check this out and destroooooooy!! 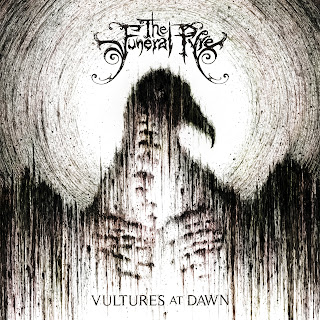 myspace | under the shadow of the vulture
Publicada por Unknown à(s) 12:59