Debut album of the NY "occult doom rock" band Occultation. One of the most interesting albums of the year, in my personal opinion. I've read, on some well known music related websites, some great reviews about this album but for me it just took one look at the cover in order to check it out. Besides that, it features on its formation Nameless Void from Negative Plane who have launched an amazing album (featured on my Best Of 2011 List), but before i knew this fact, as i heard this wonderful album, there was a voice inside my head whispering "Thisssss ssssssound familiarrrrrr.... Negative Planeeeeeee...." i swear it's true. You will figure that out, if you are familiar with Negative Plane, as soon as you hear this album. Well, with a name like this, Occultation, it all moves around... yes, the occult. And that's fine by me. Because that's the main reason I'm into this "religion", since very young i've always been attracted by the whole imagery around it. And that is precisely what fuels this band, it breathes and exhales occult. The environment of this album is indeed bizarre, each track is named as if they serve to carry out certain specific rituals. The music has this ritualistic retro atmosphere and the voice is just amazing, many of you might hate it, i personally love it. Every single detail on this album is just delicious, beginning with that guitar sound, the drum, those bells, that creepy sounding keyboard... simply amazing. This is for sure one of the best albums for the year. Try and give it a listen. Buy it here or here. Highly recommended! 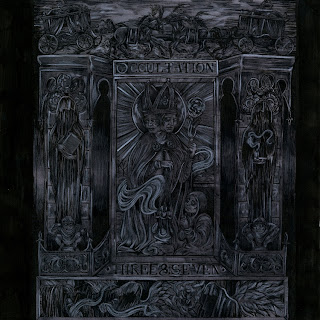