"Deathwomb Catechesis" is a highly anticipated full-length debut for the Russians Pseudogod. Delivering an abrasive blend of old school death and some of the most ferocious black metal, this album bears the mark of the Beast all over it. This is pure, barbaric hate. Boundless morbidity, bestial churn, grinding disease, otherworldly dread: these are the hallmarks of Pseudogod, who've quickly decimated the extreme Satanic Black Death scene over the past few years to become one of the most-hailed bands around. Evoking its namesake as well as a host of other nameless horrors, this work of art drives deep into the mysteries of death, dragging the helpless listen along as their sepulchral black/death conjures its spell. Prepare, then, to enter Pseudogod's deathwomb! What a great fucking album this is, one serious candidate for the numerous Best Of 2012 Lists. Recommended for die hards of Archgoat, Teitanblood, early Belial, and Demoncy. Man , that booklet artwork sure looks fucking awesome. Worship it here. Highly Recommended! 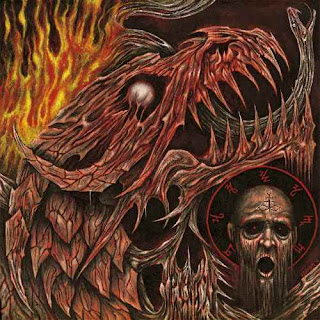