Words can't exactly express what i feel at this moment. After last year's astonishing "Buried Beneath Aeons", Aldebaran are back with another monumental piece of doom. "Embracing The Lightless Depths" is the second full length from this Portland band... and what a piece it is.

The album begins with “Occultation of Hali’s Gates”, an instrumental that serves as appetizer, sharpening our hunger for doom as it hits us gently with an embedded gloom. "Forever In The Dream Of Death" an almost 25 minute length track, drags us down into Aldebaran's morbid universe filled with a breathtaking atmosphere filled with shades of dusk and misery at a snails pace. "Occultation Of Ocular Tauri" is the instrumental interlude that follows, basically this album has the scheme of interlude-track-interlude-track-interlude, those three interludes help separate and yet link the two massive dirges. On "Embracing The Lightless Depths" one thing you'll notice is the song titles, which have connections to the short story “An Inhabitant of Carcosa” written by Ambrose Bierce, whose post-apocalyptic tale and fictional planet influenced many writers, including H.P. Lovecraft among them. Opener “Occultation of Hali’s Gates”, “Occultation of Occular Tari” and closer “Occultation of Dim Carcosa” are clean and haunting, making you feel totally alone yet oddly at peace.  Throughout the whole album,  there are measured and processional beats that cut the thick funeral air, the haunting vocal that hits with precision, striking in the hollows of the soul and each instrumental element is given space to coil and surround with a monolithic power. Moments of calm permeate the twilight offsetting the moving and commanding builds to exaltation. Rolling drum beats pound deeply in a morbid essence before sliding back to make room for deep breaths of doom. Beautiful.

Although Aldebaran have done a lot since their first release in 2004, this is only the band's second full-length. One of their biggest and brilliant milestones was "Buried Beneath Aeons" EP from last year. Aldebaran have consistently produced some of the most intoxicating funeral death doom. "Embracing The Lightless Depths" is a wonderfully majestic album composed of two great tracks surrounded by three graceful passages involving this album making it one of the brightest of 2012. Don't sleep on this one. Highly Recommended album. Buy it here. 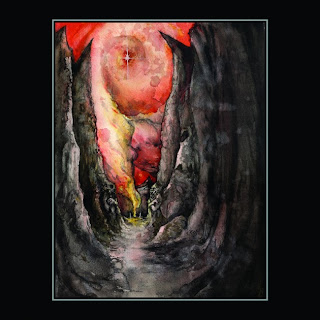