Here is one of my recent and amazing discoveries, i totally lost track of a good handful of albums while i was abroad, and on one of my music updates i found this. Thanks to JGD over at the unachievable The Living Doorway, who's recent blogging spree has overrun every single music related blog on the planet, and how i envy you for finding this.

What an amazing album this is. Coming out of nowhere, arrives simply one of the most devastating albums for the year. And from where you might ask? From Iceland. At this point, if you're a regular blogger follower of FxC or over at the social-snitch-for-the-masses aka Facebook, you know I'm a sucker when it comes to Icelandic black metal. Coming from one of the most restful countries in the World, Azoic are a band formed by two members coming from the icelandic extreme music background from bands such as Atrum, Beneath & Offerings. "Gateways" is the debut album from Azoic, and it just took me like 20 seconds of it to realize that this was some serious and powerful stuff. One very serious candidate for those end of the year Lists, winner for the "Revelation of the year" award maybe. Every single aspect on this album is excellent, starting from the artwork that basically sums up what you're about to hear; a great sound production; great song structure and powerful performances. The album opens with "Apeiron", an authentic blast of black/death metal that will suck you straight into this frozen portal of icelandic terror, the influence of the, let me call it, neo-classical black metal from Deathspell Omega is more than obvious on Azoic's sound, but unlike his icelandic brothers, it also carries that avant-garde, progressive side that we can find in this new black metal generation like Dodecahedron for example. The songs once again have each one, their unique personality which i enjoy the most on a record, because it makes, i don't say all of them, but at least makes a big part of the tracks, memorable. The riffs on "Gateways" are powerful enough to open breaches from one side to another of the Earth, and that allied with the intense and devastating drumming and that growling and demoniacal voice, it goes beyond your darkest thoughts. No matter what side we look into this beast in, what we'll get is always this malevolent, transcending, powerful black metal that will blow you into smithereens. Amazing, amazing album. Highly Recommended! Be sure to follow Azoic here. 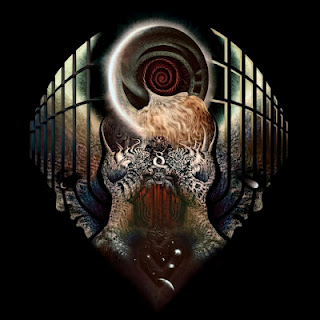