In the late '90s every hardcore band started their set the same way. The band prepped up gear and stretched for the exercise ahead of them while the singer jumped around like a motivational speaker with its head cut off, squawking about the scene and their major crush for each band that played before them. But not Disembodied, they were the odd band out in the era of zines and distros. Their sets began with a swelling, a growling of the bass, and when the whole band came in there was nothing positive screamed-Disembodied were the dark side of hardcore.

"If God Only Knew The Rest Were Dead", released in 1998 by Ferret Records, began with the same building and dissidence of anger as Disembodied did live. Each of the five songs lyrically painted a different type of failure of hope over a world-ending scenario. The darkness of the EP left Disembodied in a very small club of hardcore. There were no basketball jerseys worn in this club.

For many these days chuggy thumpy hardcore seems like a punch line to a joke, but some bands, and some records stand to be revisited-and you know what, some should be celebrated. "If God Only Knew The Rest Were Dead" is one of those records. I can only imagine that, if this was released today, people would call it "sludge" or something like that... sorry to disappoint you kids. This band introduced me to a whole new world of metallic hardcore. This is a personal rip of mine so i hope you enjoy it. 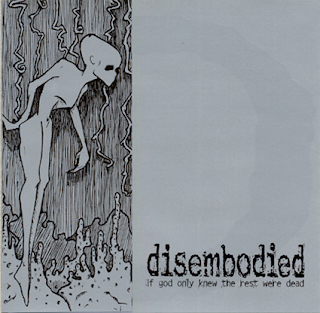