How come there's no Harassor on this blog? Well, is about time, and time is now.
Harassor is an black metal/thrash/punk destroyer trio from California and they have been around since 2003 and are well known for their bloody live performances. These guys are also into other projects, drummer Sandorf is the twisted mind behind Lord Time (whom i talked about here) and Andorkappen and he also runs Universal Consciousness label that shelters names as Wrath Of The Weak and Gnaw Their Tongues. Vocalist Pete Majors (this guy always reminds me of Captain Spaulding from "The House Of 1000 Corpses") is involved in projects as Dargar and Hive Mind and he also manages Vacation Vinyl label. And at last the guitarist "Roach" is also in some projects such as Moonknight and Dargar and guess what? He also manages a Record label called Rising Beast. This is their full-lenght, released this year by the hand of Universal Consciousness, check the link back to buy this album which is an abomination mixture of sludgy thrashy black punk metal. Let your worst nightmares come to life! 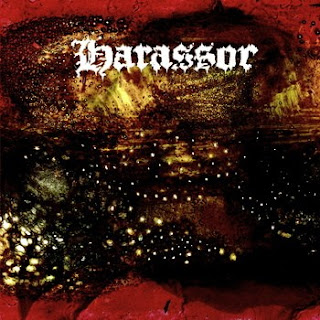 myspace | the bad, the ugly and the dirty
Publicada por Unknown à(s) 13:39