This one just arrived this morning, still warm...
No.. still cold.

Spellhammer are Sorcering Abyss & Necro Gauntlet who have sold their souls in order to unleash the true tattarmassian Black Metal from Northern Ore, Finland. Formed in Anno Satanas 2010, they have sworn to seek the treasure in the black Pond of Tattarisuo, which once was prophecised by an evil sorcerer. Spellhammer play this kind of raw, low-fi and cold BM in the likes of the First Wave of Black Metal. "Goat's Hill" was recorded in two parts, first 7 tracks being the original goats hill sessions, recorded in Käpylä recording dungeon & vocals in a haunted cabin at the forests of sherwood. The last three songs where recorded a month or two later in Tattarmass sessions, in Käpylä recording dungeon, situated in Southern Wastelands. I really enjoyed this, the low budget low-fi production really gets you in the spirit of this album. And knowing how and where, it was recorded, it helps even more. The keyboard used in some tracks is that genius touch that ends up in making the difference. The whole aura that Spellhammer's "Goat's Hill" introduces, really has that stench from the 80's. Tired of that new reinvented post BM? Then this the thing for you. Let the ancient glory of primordial Black Metal be awaken!! Rise from the shadowy graves and dark forests!! Thanks a lot for the band for sending this gem towards me, and for giving it for free at their Bandcamp. 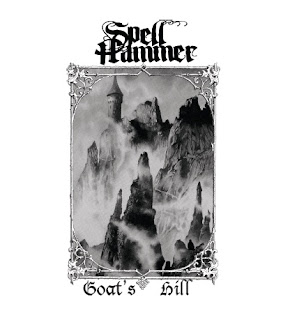